Avant Guarde, a French term meaning vanguard, or advanced guard, was originally used to denote the vanguard of an army and was first applied to art in France in the early 19th century.

The term refers to any artist, movement or work of art that breaks with precedent and is considered innovative and transgressive of the status quo. Due to its radical nature, and the fact that it challenges existing art establishment ideas, processes, and forms, the avant-garde movement has often encountered resistance and controversy in the art world.

The beginning of the avant-garde

It can be said that avant-garde art began in the 1850s with the realism by Gustave Courbet, who was strongly influenced by early socialist ideas. This was followed by the successive movements of the modern art , and the term avant-garde is more or less synonymous with modern.

Some avant-garde movements, such as the Cubism , for example, have focused primarily on the innovations of form , others, such as Futurism , Stijl or Surrealism , have had strong social programs.

The development of the avant-garde

Although the term Avant-garde or avant-garde was originally applied to innovative approaches to artistic creation in the 19th and early 20th centuries, it is applicable to all art that pushes the boundaries of ideas and creativity, and is still used today. to describe art that is radical or reflects originality of vision.

The avant-garde notion enshrines the idea that art should be judged primarily on the quality and originality of the artist's vision and ideas.

Because of its radical character and the fact that it challenges existing ideas, processes and forms, avant-garde artists and works of art often go hand in hand with controversy. Explore the works of art that caused a ruckus. Innocent as it may seem to us today, Edgar Degas 's Fourteen-Year-Old Little Ballerina caused outrage when it was first exhibited at the 1881 Impressionist exhibition in Paris. The figure was variously described as "repulsive" and "a menace to society". Critics and audiences were upset by the work's realism but also because Degas had depicted a provocative modern theme...the dancers were considered part of the seedier side of the show and little more than prostitutes. 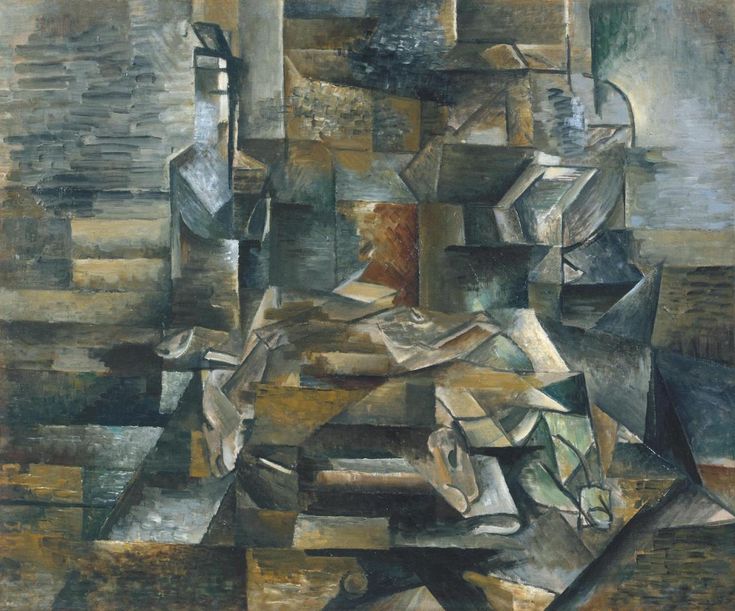 Around 1907, Pablo Picasso and Georges Braque developed a revolutionary new style of painting that transformed everyday objects, landscapes, and people into geometric shapes. Cubism paved the way for many of the abstract art styles of the 20th century, but the movement's name derives from the disparaging response of a critic who described one of Braque's landscape paintings as "Cubist oddities".

Picasso and Braque conceived and developed Cubism, but other artists also adopted the style, notably Fernand Leger, Albert Gleizes, and Louis Marcoussis. From its Parisian epicenter, Cubist ideas spread rapidly and deeply marked the path of the Russian avant-garde, Italian Futurism, and German Expressionism, among others. In the following pages we present a special selection of significant works from the different avant-garde movements that have been touched by the prism of Cubism.

The Luncheon of the Rowers - Renoir

While Impressionist art may not seem avant-garde by contemporary standards, the movement was revolutionary for its time. Rejected by the traditional Paris Salon , painters such as Claude Monet , Edgar Degas, and Pierre-Auguste Renoir privileged landscapes and scenes of everyday life over accepted historical and mythological subjects. They also broke with tradition by going out of the studio and painting outdoors . 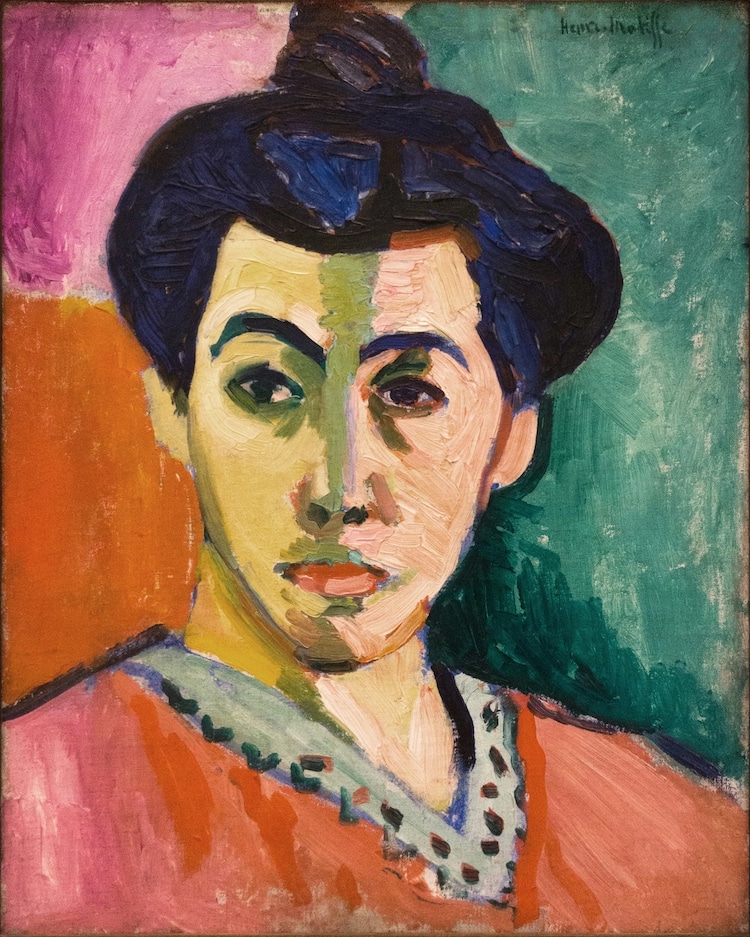 Impressionism unleashed a wave of innovative artists and styles. Among them was a brief but powerful movement called Fauvism . Co-founded by French artists Henri Matisse and André Derain, the style of les Fauves , or "the wild beasts," is characterized by a saturated color palette, thick brushstrokes, and simplified, often almost abstract, forms. Fauvism acted as a transitional period for many of the artists associated with it, most notably Matisse and Georges Braque. Following its completion in 1910, these figures used their Fauvist experience to embark on new projects and enter new periods.

Dynamism of a dog on a leash, Giacomo Balla (Futurism) 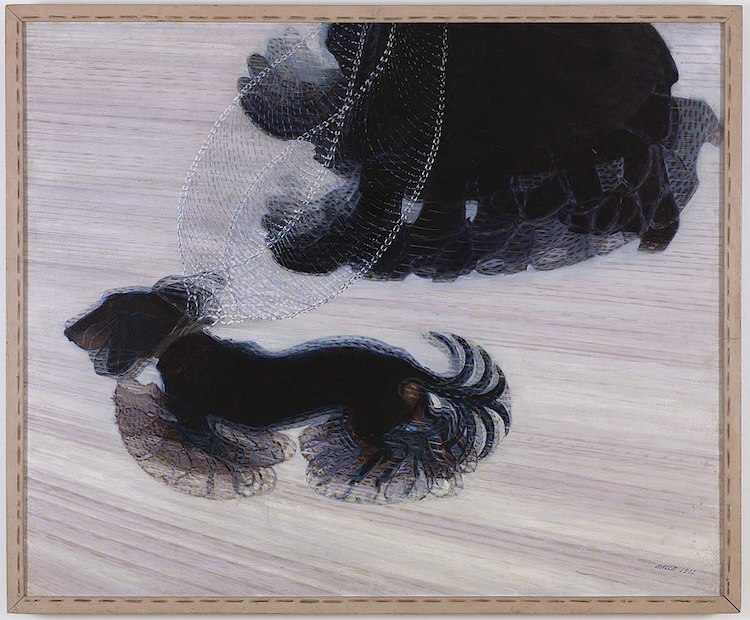 Founded in 1909, Futurism was an avant-garde movement that embraced innovation, technology, and transportation, all components of the future that emerged after World War I. A hallmark of futuristic art is the depiction of speed and movement. In particular, they adhered to the principles of " universal dynamism ", which meant that no single object is separate from its background or from another object. Italian sculptor and leading futurist artist Umberto Boccioni explained the movement: "We synthesized each moment (time, place, shape, color tone) and thus painted the picture." Surrealism is a highly experimental genre based on principles of the subconscious mind, borrowed from a literary technique called automatism . This break with reality gave surrealist artists such as René Magritte , Salvador Dalí , and Man Ray complete creative freedom, as they were no longer guided by academic principles. The dream setting of his art combines realistic depictions of fantastical subjects. The Surrealists were also known for dabbling in many forms of art, from painting and sculpture to photography and film. Recognized in the late 1960s as the leader of the avant-garde art in America, with interests in painting, printmaking, video art, filmmaking, sculpture, assemblage, and conceptual art, Warhol used modern creative methods such as screen printing to produce iconic portraits of celebrities such as Elvis Presley and Marilyn Monroe. He turned the stars into objects of modern art and in the process made himself, the artist, a star. This gave him access to a number of exclusive social circles with intellectuals, media moguls, Hollywood movie stars, and other wealthy patrons. He also used modern methods of production, employing a variety of assistants in his New York workshop, known as the "Factory". Since his untimely death in 1987, Warhol has been the subject of numerous retrospective exhibitions around the world, as well as documentaries, books, and articles. In recent years, the art of Warhol, along with the works of the surrealist Francis Bacon, have become the most sought-after examples of the early postmodern art.

Although the idea of ​​the avant-garde suggests a concern with breaking new ground, in almost all cases this does not reflect an independent interest in novelty, but rather is based on a desire to give a clearer impression of "reality". For Gustave Courbet , that meant depicting the hard working lives that were banished from the academic canvas; for the Impressionists it meant capturing the effects of light on the retina at the moment of perception; for constructivists it meant depicting the invisible scientific forces at work beneath the surface of visible reality. But in all cases, the underlying goal was the desire to represent reality in a new and accurate way.

The idea of ​​the avant-garde has traditionally been subject to two interpretations. On the one hand, it is seen as inextricably linked to a radical social or political program, so that transgressive art becomes the vehicle for transgressive social and political activity. On the other hand, avant-garde art has been seen as the domain of pure stylistic experimentation, free from social concerns of any kind. These two definitions have their own accompanying chronologies, hierarchies, and critical rubrics, which are often surprisingly at odds with each other.
The birth of the avant-garde was also the birth of the idea of ​​"anti-art": that art could stake its value in part by undermining, subverting, or mocking pre-existing notions of artistic worth. From the Impressionists, with their quick and loose brushwork, to Marcel Duchamp with his readymades, avant-garde art has always derived part of its impact from its blatant disregard for existing norms and its ability to generate an impression of non-art, even ugliness. .