To discover the true roots and meaning of lyrical abstraction, and to understand how they interact with its tendencies in art, we must look to the early days of abstract art.

Lyrical abstraction is a seemingly simple term, and yet its origin and meaning have been debated for generations. American art collector Larry Aldrich used the term in 1969 to define the nature of several works he had recently collected, which he felt indicated a return to personal expression and experimentation following minimalism.

But the French art critic Jean José Marchand used a variation of the term, Abstraction Lyrique, decades earlier, in 1947, to refer to an emerging European trend in painting similar to Abstract Expressionism in the US. Both uses of the term are they referred to art that was characterized by being free, emotional and personal compositions outside objective reality.

But those trends can be traced even further back, at least to the first decade of the 20th century in the work of Wassily Kandinsky . Although the Russian painter Wassily Kandinsky (1866-1944) could be said to have pioneered the elegant combination of narrative, form, and color that is the basis of lyrical abstraction, the trend emerged in an exhibition entitled "L'Imaginaire," which It was held at the Galerie du Luxembourg in Paris in 1947 and included works by Hans Hartung, Wols (Alfred Otto Wolfgang Schulze), and Jean-Paul Riopelle, among others.

The current term "Lyrique Abstraction" was coined by the French painter and exhibition co-organizer Georges Mathieu (1921-2012), while his fellow curator Jose-Jean-Marchand wrote that some of the works exhibited displayed "a lyricism detached from all servitude...", meaning that the paintings were not derived or weighed down by the weight of intellectual theory.

Looking for the lyrical in lyrical abstraction

In the 1910s, several different groups of artists flirted with the concept of lyrical abstraction, each from a unique perspective. Cubist and Futurist artists worked with images from the real world and conceptually modified them to express abstract ideas. Suprematist and Constructivist artists were working with recognizable forms in their art, but using them in an ambiguous or symbolic way, or in a way that tried to convey universalities.

But another group of artists approached abstraction from a completely different perspective than the rest.

This group, epitomized by Wassily Kandinsky , approached abstraction from the perspective that they did not know what meaning what they painted could have. They hoped that simply by painting freely, without preconceived notions of aesthetics or the objective world, something unknown could be expressed through their work. Kandinsky compared his paintings to musical compositions, which communicated emotions in a completely abstract way. His abstract paintings were imaginative, emotional, expressive, personal, passionate, and entirely subjective; in other words, lyrics. In theory, Art Informel was the main movement encompassing numerous sub-styles and subgroups, such as Forces Nouvelles, CoBrA, Tachisme, Art Brut, Art Non Figuratif, and Lyrical Abstraction. All of these schools were abstract or at least semi-abstract, all rejecting geometric abstraction as well as naturalism and figurative genres. All artists sought to create a new and spontaneous style of painting, free from past theories or present conventions. Despite all this, many abstract painters of the time were members of one or more of these sub-movements, and as a result, it is almost impossible to authoritatively identify the paintings belonging to each of these movements. Kandinsky 's lyrical abstraction contrasted with many of the other abstract art trends of the 1920s and 1930s. His art was not specifically associated with any religion, but there was something overtly spiritual about it. Other artists associated with styles such as De Stijl, Art Concrete, and Surrealism were making art that was secular and lent itself to objective scholarly interpretation. Kandinsky was looking for something that could never be fully defined or explained. He openly expressed his personal connection to the mysteries of the universe. It was as if he had invented a kind of spiritual existentialism.

Existentialism was a philosophy that rose to prominence after World War II, when people were struggling to understand what they perceived to be the meaninglessness of life. Critical thinkers could not believe that there could be a higher power that would allow the kind of destruction they had just witnessed. But instead of becoming nihilistic in the seeming absence of god, existentialists tried to cut through the general nonsense of life, searching for personal meaning. As existentialist author Jean-Paul Sartre wrote in his 1943 book Being and Nothingness, “Man is doomed to be free; he is responsible for everything he does.” The search for what is essentially personal was central to existentialism, and also to the widespread revival of lyrical abstraction after World War II.

Other names associated with Lyrical Abstraction

Throughout the 1940s and 1950s, a host of abstract art movements emerged that, in one way or another, involved subjective personal expression as the basis for expressing meaning in art. Lyrique Abstraction, Art Informel, Tachisme, Art Brut, Abstract Expressionism , Color Field art, and even conceptual and performance art all, to some extent, hark back to the same general existential quest. One of the most influential art critics of this time, Harold Rosenberg, got it when he wrote: "Today, every artist must commit himself to inventing himself... The meaning of art in our time flows from this function of self-creation." ".

But as the culture changed with the next generation, many of these existential trends in art fell out of favor. And once again, a geometric, concrete and emotionless approach to abstract art, epitomized by minimalism, took its place.

But not all artists abandoned the lyrical tradition. By the end of the 1960s, the tide had turned once again. As noted by Larry Aldrich, who revived the term Lyrical Abstraction in 1969, “Early last season, it became apparent that there was a movement in painting away from the geometric, the stark, and the minimalist, toward the more lyrical.” , sensual, romantic abstractions in softer and more vibrant colors… The artist's touch is always visible in this type of painting, even when the paintings are made with spray guns, sponges or other objects”. It is evident that, as is often the case with artistic movements , the trends that define lyrical abstraction predate the coinage of the term. In the first decades of the 20th century, artists such as Wassily Kandinsky , Alberto Giacometti, Jean Fautrier, Paul Klee, and Wols first embodied lyrical trends in abstraction. And decades later, artists like Georges Mathieu, Jean-Paul Riopelle, Pierre Soulages and Joan Mitchell carried them forward. Then, in the late 1960s and 1970s, artists like Helen Frankenthaler, Jules Olitski, Mark Rothko, and scores of others revitalized and expanded the relevance of the position.

In 2015, one of the most fascinating voices of contemporary lyrical abstraction, the Spanish artist Laurent Jiménez-Balaguer, passed away. But his concepts, theories, and techniques continue to manifest powerfully today in the work of artists such as Margaret Neill, whose instinctive compositions of interlocking lyrical lines invite the viewer into a subjective participation in personal meaning, and Ellen Priest, whose work brings to life to his aesthetic conversation with jazz music. What unites all these artists in a common bond is the fundamental quest of lyrical abstraction: to express something personal, subjective and emotional, and to do so in a poetic and abstract way.

A movement that became known as lyrical abstraction emerged in the United States during the 1960s and 1970s, in response to the growth of minimalism and conceptual art. Numerous painters began to move away from geometric, precision, hard-edged and minimalist styles, towards a more harmonious and painterly style, employing rich and sensual colours. They intended to re-establish aesthetic principles, instead of continuing with a spontaneous socio-political iconography. This American form of lyrical abstraction is exemplified in works by Helen Frankenthaler (b. 1928) and Jules Olitski (1922-2007), among others. An exhibition entitled "Lyrical Abstraction" was held at the Whitney Museum of American Art, in May-July 1971.

During this period, however, there were a number of similar variations of second-generation abstract expressionism (post-painterly abstraction). And while there were clear theoretical distinctions between Color Field Painting, Hard Edge Painting, Color Stain Painting, and Lyrical Abstraction, among others, these points of difference are by no means obvious to the naked eye.

Paintings from the Lyrical Abstraction movement hang today in the best art museums in the world. 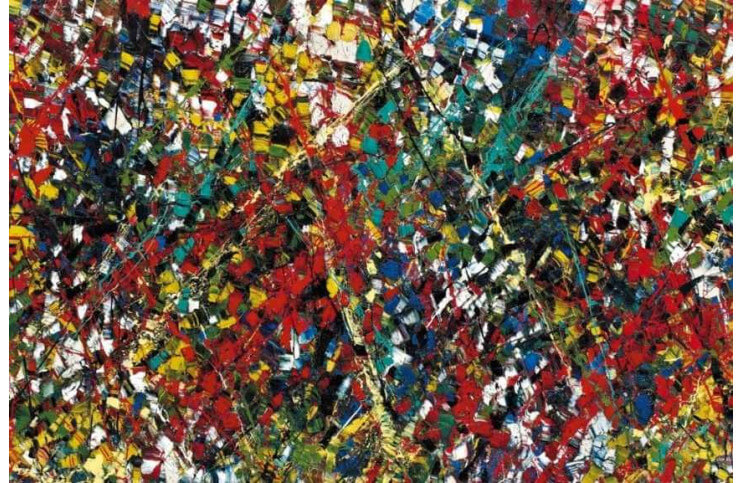 Lyrical abstraction was not a specific school or movement, rather a trend within Art Informel. Think of it as a balanced, elegant (sometimes lively, sometimes relaxing) style of abstract art that is almost always loaded with content drawn from the natural world.

Often framed by sumptuous colour, its harmonious and painterly beauty can be contrasted with the harsh, distressed and dissonant images produced by other Art Informal groups such as Cobra or recent neo-expressionists.

Buy a replica of Wassily Kandinsky , one of the best exponents of Lyrical Abstraction.